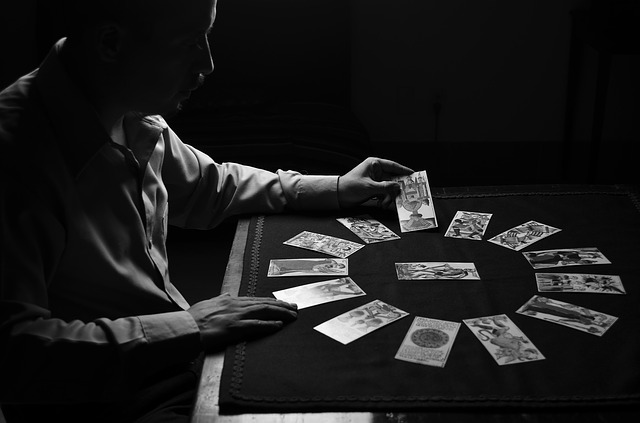 Most of what I’m going to lecture from come from Cynthia Giles’ book: The Tarot, History, Mystery and Lore and some other resources.

The origins of the Tarot have been attributed a wide range of wacky sources – paleolithic cave paintings, gypsy folk lore, Moroccan mystics and even gifts from space aliens to Egyptian priests. Most of these stories are, of course, speculation of the wildest, most ridiculous kind, and only serve to muddy the waters when it comes to understanding the Tarot. If you’re going to use the cards, it’s important to understand where they come from – so that you know their rich history, their potential and their value – and not put faith in silly urban legends.

The first mention of the cards was in Italy in the 14th century, called “Tarocco” and used for games – and already, authorities were lecturing against its use. The first known deck was made for the Vicsconzi-Sforza family of Milan, designed by the artist Bembo. According to Tarot expert Gertrude Moakley, the various characters illustrated in the major arcana represented the triomfi, or parade, that accompanied Italian celebrations.

Historians believe that there may have been other cards that existed to represent other characters but have disappeared over time. Few decks of Tarot cards exist for those early days, but there’s enough similarity in artwork to make it clear that the deck was in common use in that time. Some historians believe that the Tarot was originally only used as a gaming deck – to play a game called tarocchi – until occultists began using them for divination.

The next big milestone in Tarot’s history came in the late 1700’s when Court de Gebelen, a member of a secret society of occultists, came across the a game of tarocchi and became obsessed with the cards. He believed them to be imbued with important symbolism which he attributed to ancient Egyptian lore. De Geblen wrote a nine-volume treatise titled “Le Monde Primitif” in which he discussed the meanings of the Tarot. That he attributed the Tarot’s symbolism to the Egyptian’s was based less on any real fact than on the fascination that Europeans had with Egypt at that time, believing it to be the center of all of man’s early wisdom. Use of the cards for divination spread during that time, with a book by a man named Etteilla in 1783, in which he offered his interpretations of the cards. In fact, professional mystics began using the Tarot throughout Europe, although there was no consensus of what the cards actually meant.

The mystical background of the Tarot

Card readings have long been associated with Gypsies, although they certainly weren’t responsible for their creation. For hundreds of years, Gypsies made their way across the world, living by their wits and earning a living by any skills that they could market. Gypsies were exotic, feared and looked down on, but there was an aura of romance about them that caught the imagination of Europeans in the 1800’s. A book was published towards the end of the century called “The Tarot of the Bohemians,” attributing the Tarot to the Gypsies (who Europeans commonly believed came from Egypt). Interestingly, Gypsies used regular playing cards for divination – not the Tarot.

In the 19th century, the famed mystic Eliphas Levi Zahed (whose real name was Alphonse Louis Constant) connected the Taror with Hebrew mysticism – the Kabbalah. He saw the Tarot as a key to life, a tool that man can use to develop himself as a human being, as a way to grow so that he might find heaven. His work outlined 22 connections to the tarot major arcana, making it a tool to be used on the path to enlightenment.

The modern Tarot deck was most influenced by the cards used in the late 1800’s by the Hermetic Order of the Golden Dawn. The order was founded in England by three men who, according to lore, found an old secret manuscript written in code, deciphered it as the by-laws of a secret German society, and received permission to start their own group in England. Years later, the woman who gave them permission died, and the German members disavowed the British branch, saying they never got permission after all.

The modern Tarot is born

Despite its contentious beginnings, the Golden Dawn became a very influential group, with two members in particular doing a great deal to spread the popularity of occultism – Aleister Crowley and Arthur Edward Waite. Crowley, a protégé of the Golden Dawn founders in England, created a Tarot called the Book of Thoth. Waite created the Tarot deck that’s most familiar to modern users. Working with an American artist named Pamela Coleman Smith, Waite used a storytelling theme, utilizing characters from myth, legend and religion, allocating a group of symbols to each card that gives them unique meaning. His Tarot formed the foundation on which most decks that followed were based.

The next milestone in the Tarot’s history came in the 1920’s, when a Golden Dawn member named Paul Foster Case started a group in Los Angeles called Builders of the Adytum (BOTA). The BOTA deck is in black and white, created so that the owner could color the drawings themselves (it was a tradition in the Golden Dawn that each member had to make their own deck as part of their training). The group offers Tarot training to this day, although their interpretations of the cards are disputed by many divination experts.

Today, there are countless versions of the Crowley / Waite Tarot available, some with magnificent artwork, others less impressive. Whatever your choice of deck, using the Tarot as a divination tool is a personal experience, one that’s origins reach far back in history. Hopefully, knowing the background of this ancient art will enhance your connection to the cards, and to your own readings.