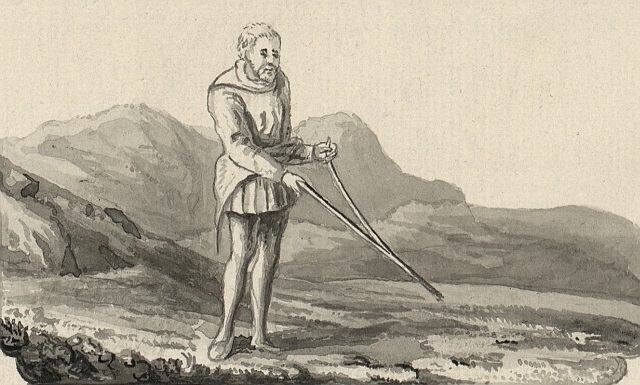 Dowsing, sometimes associated with the word, radioesthesia, is the use of a special instrument to identify or find an object or condition in physical matter. Dowsing is generally associated with finding oil, water or precious metals, but sometimes an object that is missing. To this end, various Dowsing instruments are used – on either a map, a picture or an actual physical location. Dowsing is probably a very ancient practice. There is evidence that Dowsing goes back as far as ancient Egypt and ancient China. Dowsing was reportedly used to find coal during the Middle Ages.

The most popular tools for Dowsing are the “wishing rods,” which are often made out of metal these days but sometimes out of wood, as was common in the past- and the pendulum.

Dowsing, in the fast, generally used, wood. Popular woods that were used for Dowsing were hazel branches, generally forked, along with beech, alder and apple. Nowadays, as before, the Dowsing rods, when used, are held in an L-shape with discovery being made when the rods cross each other. Pendulums used for Dowsing are simply generally string weighted with some type of crystal or other type of weight.

Sir William Barrett, a physics professor at the Royal College of Science in Dublin at the end of the century, was extremely skeptical of Dowsing until he became familiar with a dowser named John Mullins, who was hired by the Waterford Bacon Factory to locate underground streams of water. The small forked stick he used for Dowsing almost immediately bore more fruit than the work of various professional geologists who had failed to identify the water source. Later on, Barrett would be one of the main founders of the British Society for Psychical Research and publish the results of his research on Dowsing in the Society’s Proceedings.

Classic research on Dowsing was conducted and reported by Dr. Solco W. Tromp, a Dutch professor of geology, who was the director of the Bioclimatological Center in London. His chief book related to parapsychological research was Psychical Physics, a work speaking of the influence of various types of electrical and magnetic field on living organisms. It included the effects of these types of fields on dowsers, which he himself tested in the laboratory. To this end, used a galvanometer with a wooden ring and a coil of wire to create a magnetic field. He found that, although dowsers could not really determine the intensity of the field, they could detect changes in it. He also found that Dowsing in the field, using a pendulum for quicker results, could successfully enable to dowser to detect different types of magnetic anomalies

Theories of Dowsing vary, but it is often supposed that the Dowsing instrument conveys to the psyche of the dowser a subtle energy detected around the object in question. So a field of energy, perhaps still unknown to modern science, is postulated to be the cause of the phenomenon. For those interested, there is still an American and a British Society of Dowsers. Their addresses are: The British Society of Dowsers, Sycamore College, Tamley Lane, Hastingleigh, Ashford, Kent, TN25 5HW, England and The American Society of Dowsers, Inc., Danville, Vermont, 05828.