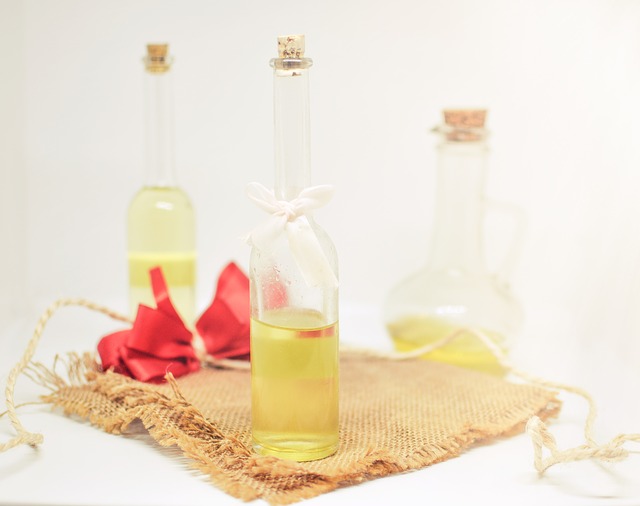 Ah, Patchouli oil – people seem to love it or hate it. This well know essential oil has a somewhat deserved reputation as the scent of the Hippy generation (according to one source, it’s use began as a mask for the odor of a particularly cherished herb), though it’s traditional use dates back hundreds, perhaps thousands of years. Today, Patchouli oil has a well-deserved reputation in aromatherapy, with it’s deep, musky, and sweet odor, and Earth and Fire balancing energy. It is an exotic aroma that can forever leave an imprint on the olfactory memory.

Patchouli (Pogostemon cablin) is a perennial herb native to Southeast Asia, growing wild in Sumatra and Java at elevations between 3,000 and 6,000 feet – though it’s cultivation is more pervasive in lower tropical jungles. This bushy plant grows to the height of 3 feet, having a strong stem and soft, hairy leaves. For essential oil production, the plant is cut two or three times per year, with the best quality oil derived from leaves harvested in the wet season. The leaves are hand picked, bundled or baled, and allowed to partially dry in the shade and ferment for a few days before the oil is extracted via steam distillation (Patchouli oil is now becoming available as a CO2 extract in limited quantities). The fermentation process softens the plant’s cell walls, easing the extraction of the oil.

The relative ease of it’s cultivation, and it’s high oil yield keeps the price of true Patchouli essential oils relatively low. It is important to note however, Patchouli is one of the few essential oils that improve with age (others being Frankincense, Cedarwood, Sandalwood and Vetiver), and that a properly aged Patchouli oil is much more desirable than a fresh one. Over time, the oil looses a harshness that many find distasteful, and adds a sweet top note. As it ages, the oil turns from light yellow to a deep amber, with the aroma becoming smoother and more rich. Principal constituents of the oil include: Patchoulol (25-35%), Alpha-Bulnesene (12-20%), Alpha-Guaiene + Seychellene (15-25%), and Alpha-Patchoulene (5-9%).

Perhaps first due to it’s power as a moth repellent, the aroma of Patchouli was pervasive in cloth and clothing exported from India in the 19th century. The scent became an indicator of true ‘Oriental’ fabric, so much so that English and French garment makers were obliged to scent their imitation products with Patchouli to ensure their acceptance in the domestic marketplace. Beyond its use for preventing holes from being eaten in one’s cloting, Patchouli oil has been used for centuries in traditional medicine in Malaysia, China and Japan. Primarily indicated for skin conditions, Patchouli may be of benefit in cases of dermatitis, eczema, acne, dry chapped skin, and other irritating conditions, along with dandruff and oily scalp conditions. As a cell rejuvenator, it may help in healing wounds and reducing the appearance of scars. It is considered an excellent remedy for insect and snake bites, and has been used as a fumigant and rubbing oil to prevent the spread of fevers and to strengthen the immune system.

Patchouli oil is considered an excellent base note and fixative in perfumery, being a component in many famous perfumes. As a fixative, it slows the evaporation of other, more volatile oils so that their aroma may be released over a longer period of time. A little patchouli can be used in natural perfume blends, adding that special deep and earthy aroma. It mixes well with many essential oils, with almost all common oils being mentioned across a variety of sources – these include Vetiver, Rosemary, Sandalwood, Frankincense, Bergamot, Cedarwood, Myrrh, Jasmine, Rose, Citrus oils, Clary Sage, Lemongrass, Geranium and Ginger.

In Aromatherapy, Patchouli is considered a great balancer, relaxing yet stimulating, particularly relevant for conditions of weak immunity where overwork and anxiety have left the individual in a susceptible state. It is said to bring the three principal forces at work within the body – the Creative at the navel, the Heart center, and transcendental wisdom a the crown – into harmony.

Patchouli oil may also relieve the strain of those with excessive mental activity who may feel ‘out of touch’ with their body and sensuality. It has been considered a relaxing aphrodisiac, and can be helpful for those with impotence, frigidity, and sexual anxiety that are products of mental anguish. Patchouli combines this aphrodisiac effect with an antidepressant one, uplifting the mind with it’s sweet, warm, spicy scent.

As if this were not enough, Patchouli is thought to be a bringer of prosperity and abundance. Perhaps by allowing one to open to these possibilities energetically, the oil is used in ceremonies and prayers by those in need of financial or other type of infusion in their lives. One may simply close their eyes, imagine the abundance they need, and inhale the oil’s aroma for a few seconds.

For a few simple blends, try:

3 parts Patchouli and 1 part Rosemary Cineol. This is a wonderfully uplifting blend combining the deep earthiness of Patchouli with the invigorating aroma of Rosemary. This can certainly be worn as a perfume, or used in a diffuser.

When the going gets tedious, try brightening with 3 parts Coriander, 2 parts Patchouli and 1 part Bergamot. This may uplift the spirits and remind one of the joy to be found in life.

For the sensually insecure, try 1 part Geranium, 1 part Patchouli and 1 part Bergamot. A beautiful yet simple blend for getting comfortable in one’s own skin.

It may take a little education, but many who claim to have a dislike for Patchouli may truly enjoy it when finally getting to sample a properly aged or beautifully blended oil.